Well, I guess I can’t stop the crazy love affair with music, if I’m nuts enough to start learning the violin!

On Saturday, April 9th, 2022, I literally went down to Long and McQuade and rented a violin – and put one in my hands for the first time.  It’s a rental right now, but I’ll likely end up buying it once I convince myself that I can really learn this thing – eek.

Then I spent hours on YouTube learning how to hold the bow correctly, apply rosin, tension the bow, hold it correctly, and find the finger positions on the fretboard that will result in notes playing in tune!  Violin is much trickier than guitar, just technique wise.  So why would I put myself through the effort of learning a whole new instrument?

Well, once I started looping, I spent some time online looking at what other looping musicians were doing.  I fell in love with a couple of them who played violin, because I realized that with ONE violin played well, you can loop it into becoming a whole STRING SECTION!  Wow!

Talk about the potential for drama in my song arrangements.

So now, night after night, Gary is vacating the house because he has to listen to screech screech screech on my violin, as I learn how to achieve notes in tune and with good tone.

I have also signed up for lessons at Long and McQuade.  I had my first one yesterday.  It was pretty funny waiting for my music teacher, Stewart Evans, to descend to  the waiting area, where I was sitting surrounded by a bunch of little kids and their parents.

Don’t expect to hear me play this instrument for quite a long time… I’m not going to do it publicly unless I can do it respectably well!   I’m told this could take a year or more.

Also while at Long and McQuade on Saturday, I picked up a very small 37-key Yamaha keyboard.  I have a bigger one, but Gary and I wanted one that we could easily transport on motorcycles for doing summer pop-up shows around Alberta and BC.  This little one sounds amazing, and has a ton of great sounds – I love the organ sound. (And yes, it has a “strings” sound too – but I don’t want a fake strings sound – I want REAL strings!). 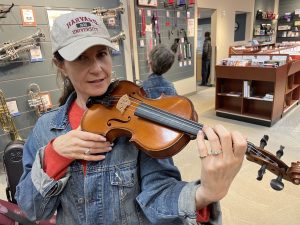